According to a new report published by Allied Market Research, titled,“Cheese Market by Source, Type, Product, and Distribution Channel: Global Opportunity Analysis and Industry Forecast, 2017 – 2023,”the global cheese market size was valued at $136,283 million in 2016, and is projected to reach $164,338 million by 2023, growing at a CAGR of 2.7% from 2017 to 2023. The natural cheese type accounted for more than 70% of the global market in 2016. Cheese is a dairy product rich in several milk fats, vitamins, and minerals, prepared by coagulation of milk proteins, separation of whey, and subsequent ripening. Milk is the major raw material used in preparation of cheese, which is reduced to one-tenth of its volume after the formation of final product. It is manufactured in variety of shapes, textures, and flavors based on the country or region where it is produced. According to types it consists of different proportions of fats and proteins. The animals whose milk are used during cheese-making include cows, buffaloes, goats, and sheep. Moreover, cheese comes in various forms, namely, hard, semi-hard, soft, and fresh. In addition, cheese offers several health benefits such as lower blood pressure, facilitated absorption of minerals via digestive tract, stronger bone & teeth, prevention of heart disease & osteoporosis, and others.

The global cheese industry was primarily occupied by North America and Europe with nearly 80% share in 2016. At present, the market is driven by large number of quick service restaurants (QSRs) in the developed regions and growth in number of QSRs in the developing regions. In addition, extensive shelf life of cheese products, rise in disposable income, and surge in demand for protein-rich food. However, growth in obesity rates & rise in health consciousness among adults, unhealthy additives & ingredients in processed cheese, and perishable nature of cheese products are expected to hamper the market growth during the cheese market forecast period. Moreover, developing market for low-fat cheese and various innovations to improve cheese taste & quality present new opportunities.

The natural cheese segment is anticipated to grow at the highest CAGR throughout the analysis period, due to high health benefits, negligible use of harmful preservative or artificial additives, and superior quality as compared to processed cheese. The raw materials employed in making the natural cheese include cultured milk, salt, enzymes, and natural colors for orange cheddars. 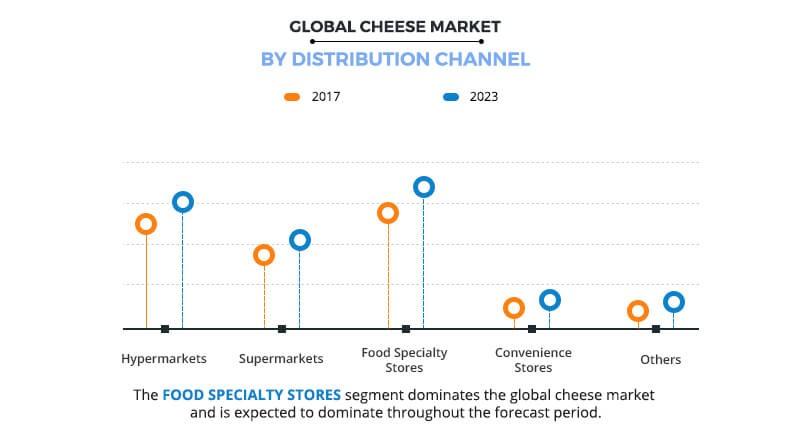 In 2016, by source, the cow milk segment accounted for the highest revenue of $110,053 million. This is attributed to the presence of protein and fat in the milk which gives flavor and texture to the cheese. Furthermore, before the cheese making process starts, the cow’s milk is pasteurized by heating the milk to a precise temperature and then rapidly cooling it. Heating milk kills the harmful bacteria present in the milk.

In 2016, North America and Europe collectively accounted for more than 70% of the global cheese market share with lesser CAGR compared to other regions, but are expected to retain more than 70% share till 2023. This is due to high per capita consumption of cheese in different countries of these regions and already established fast food restaurant chains. Asia-Pacific is projected to grow at the highest rate followed by LAMEA, owing to increase in urbanization coupled with rise in disposable income.

Key Findings of the Cheese Market: